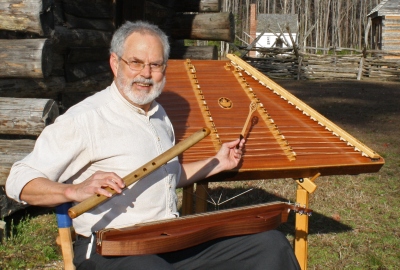 Acoustic soloist Timothy Seaman brings together an eclectic blend of music styles unlike any other: sometimes the deep voice of his four-octave extended-range hammered dulcimer takes on the heart of a Chopin ballade, and at other times the festivity of an old-time mountain dance or a glistening contemporary interpretation of a whitewater canoe ride or a highland hike among fir trees. His bamboo or silver flute improvisations and passionate folk renditions leave the air glowing with meaning --- and then the bowed psaltery or the crafted vocal carries one’s mood into yet another exploration.

A specialist in Virginia themes, nature, parks, Celtic roots and folk hymns, Timothy has since 1978 produced or co-produced nineteen recordings totaling more than 124,000 copies, including the well-received Here on This Ridge, for Shenandoah National Park, Celebration of Centuries, for his home town Williamsburg’s tri-centennial, Sycamore Rapids, featuring the hammered dulcimer in “adventures out among the trees of Virginia’s Parks and Forests,” Virginia Wildlife, for the Department of Game and Inland Fisheries, Jamestown: On the Edge of a Vast Continent, for the 400th commemoration, Cleansing Fountain, folk hymn interpretations for the Blue Ridge Parkway, a set of lyrical melodies called Celtic Airs, and the recent release for the Civil War Sesquicentennial entitled Tenting on the Old Camp Ground. Although many tracks on these CDs are full ensemble arrangements (often with all instruments played by Seaman himself), they carry the same variety and flow of thought that characterize his solo presence.

At a Seaman concert, expect to be exhilarated, amused, awed, surprised, personally involved (maybe singing a chorus or playing along on Irish bodhran or Thai frog), and enriched by real substance. Every selection is introduced with stories, fascinating details, and word pictures for a specific context, with humor, history, drama, science, and color. Come and find traditional, newly composed, and Baroque music that reviewers have referred to as “soul-to-soul” and “highly lyrical.”