Animals that are fans of our music

Apr 24 Posted by Timothy Seaman in Thoughts About Music

No, not all animals like our music!  I certainly remember when I was a teenager practicing flute our collie scratched and whined at the door --- then again, perhaps I was playing at her too much!

But last evening I got word from Lisa in California, yet another parrot owner insisting that our recordings were a favorite for the bird.  (This is the third instance I know of.)

And in 1996 when I was recording the album Here on this Ridge at the Ferris house in Yorktown, on the grounds of Colonial National Historical Park, in the early morning I was working on a possible shakuhachi (look it up if you need to!) part with the screen door open, and when I went to close the main door in order to have things quiet for recording, I heard a great deal of rustling outside and realized there were animals actually gathered nearby, like in Snow White or something!

Raccoons stood on their hind feet outside the glass door at David and Nuala’s house one time when I was performing on hammered dulcimer for a group there.

Northern Cardinals frequent the bushes outside our living room when music’s going on, often seeming to vie for the best perch near the open window.  The wrens just make noise at us, but, well, that’s wrens for you….

The Andersons used to play our Springs of Joy album for cattle at their farm and the cows gave milk more readily.

Llamas are real fans: For example, once I was playing hammered dulcimer at a rural life festival and two llamas’ heads crept past my shoulders from behind.  They were looking right at my swinging hammers and the look on their faces seemed to indicate that they were about to take turns asking questions such as  ‘Why do you use the suede side of your hammers so often?’ or such!  Their owners said they came over because they listen to my music on CDs all the time at the farm and must have recognized it and wanted to listen in person.

Our neighborhood’s squirrels won’t let us know for sure what they think of our music (sort of a cat-like response, you know) --- but I have a hunch that under that guarded demeanor they’re loving it!

The Princes’ dogs authentically sing along with us at the Williamsburg Farmers’ Market.

These are the examples that come to mind today --- there are plenty more.

Does your music have fauna fans?  Let us know, and maybe we can add another post telling the stories. 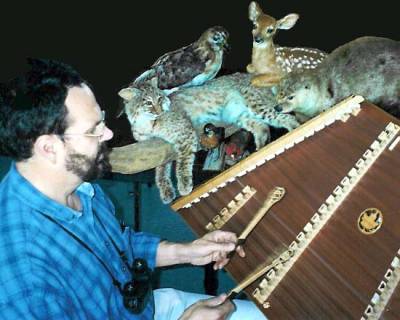