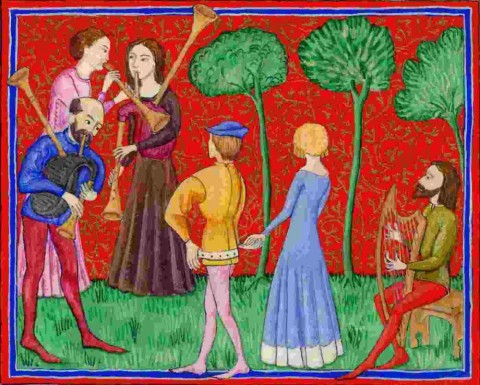 The Middle Ages of Europe is often said to have extended from about 500 to 1400 a.d. During that period there was a great deal of monophonic (one note at a time) chant, monophonic melody over a drone, and rhythmic monophonic dance music; then in the later centuries the stark harmonic parallel concept of organum was introduced and some limited polyphonic movement (more than one melodic part, overlapping in non-synchronized phrases).

Troubadours and trouveres in France in particular specialized in secular love songs and dances.

De Machaut and Dufay are especially noted for their gradual introduction of polyphonic elements.

Here are links to Youtube audio of a few samples of these people and their forms:

Gregorian chant sung by the monks of the abbey of Santa Domingo de Silos, Spain: ‘Kyrie’ from a Requiem Mass

This massive Medieval Age produced vast quantities of musical material within certain carefully limited frameworks. My understanding is that the development of what we know of as modern harmonies was suppressed by a strong spiritual/mathematical/philosophical basis for music that stressed unity by unison and harmony with the perceived order of the universe (the Harmony of the Spheres), which had perfect frequencies and intervals that weren’t to be messed with by humans’ simultaneous harmonic movements. The Renaissance gradually adapted and changed those ideas.