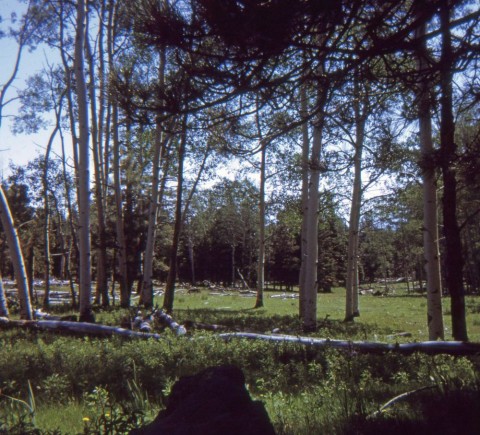 On this very date in 1969 I was seventeen years old and several days into a backpacking trek at Philmont Scout Ranch in the Rocky Mountains of northern New Mexico with friends from Virginia.  We’d hiked several days from Lover’s Leap to Lower Bonito to Crater Lake to Fish Camp, and now to Beaubien Camp, a beautiful mountain meadow among spruce, fir, and aspen in the classically wondrous Rockies ecosystem.  As a young Eagle Scout who was a backpacker at heart, this whole experience was utterly thrilling!

We got into duty crews, set up a wood fire, cooked supper from freeze-dried packages, cleaned up the dishes, then of course sat around the fire as the sun went down and the full moon rose, happily gazing into the embers of the Ponderosa Pine we’d been burning.

Someone came into our campsite.  It was the camp director from up at the cabin.  He said he’d just gotten a message over the Motorola two-way radio that he needed to come and share with us.  ‘See that full moon up there?  Neil Armstrong and Buzz Aldrin are walking on it right now!

We looked up there through the aspens at the moon, tried to imagine what it was like just then for Armstong and Aldrin, and meditatingly gazed back down at the dying embers of our wilderness fire.

I spent the following four summers there at Philmont on the Ranger staff, having the time of my life teaching and leading in backpacking expeditions --- but that one night at Beaubien at the beginning remains with me as one of the more remarkable and thrilling moments!

For a couple of years now I’ve been playing a new composition on the hammered dulcimer, and continually exploring directions it may finally take melodically and harmonically, called ‘To Gaze into the Embers,’ to commemorate that moment, and I’ve played it in whatever form it has at any given time, in many concerts.  Here’s the first video I made of it casually a couple of years ago; I’d hoped to make a new one today, but life’s demands pre-empted that….