Jun 06 Posted by Timothy Seaman in Thoughts About Music

My performance hammered dulcimer was made in 1999 by Dusty Strings, the eighth one released of the new design, the D600; they sent it to co-designer Sam Rizzetta for approval of the new model, and he recorded it on three tracks of the album Dulcimer Boogie with it. (That’s my D600 in the photos!  He played a new D550 on one other track, and his own Rizzetta Extended Range on the rest.) 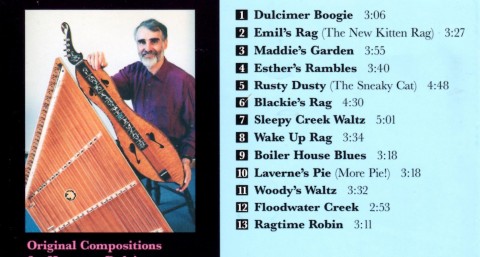 In early February of 2000 I bought this instrument fromSam, and I’ve used it ever since, performing live a great number of times (over 200 performances each year) and recording a number of albums with it: Quiet in the Meadow, Wayfaring Stranger, Sycamore Rapids, Virginia Wildlife, Profound Joy, Jamestown: On the Edge of a Vast Continent, Cleansing Fountain, Hope from on High, Celtic Airs, Gentle Breeze Beneath the Trees, and Tenting on the Old Camp Ground. (As well as, hopefully, a few more albums in the years to come!)

It was a wonderful sounding instrument from the start, as you can hear on Sam’s recording, but as time has gone on it has developed a special character that you simply can’t get from even the finest of the newest instruments.

That’s why Stradivarius violins are so greatly respected: They were magnificent from the start, and because of that they’ve been played all day long for several centuries!  The wood has gained an astonishing individual quality of tone that speaks very deeply.  Thus many violinists typically look for an instrument that’s a hundred or more years old.

I’m thrilled by the development of the new models Dusty Strings and other dulcimer builders are making --- yet I must continue using this marvelous relatively old and highly played individual instrument I live with.

Wonderful new models are worth playing, by all means!  Exciting things are happening! The Dusty Strings D570 and D670 are two excellent examples of the new ideas.  But remember the remarkable value in old, mature instruments as well, profound and mature.