Aug 18 Posted by Timothy Seaman in Thoughts About Music

One of the ultimate forms in the Classical genre is the piano concerto, to which I have listened for my entire life with keen interest and involvement.  As a hammered dulcimer player, I find particular inspiration in the great concertos, and I try to somehow transmute that mode to my playing with other musicians, even though it’s in a vastly different setting.  (Or is it?)

My four favorite pianists, the ones who thrill me the most with their playing, are Arthur Rubinstein, Rudolf Serkin, Glenn Gould, and Martha Argerich.  But there are a number of others represented here as well, and some of the greatest players are not even shown here, such as Sviatislav Richter, Alicia de Larrocha, and Daniel Barenboim.  The decisions have been challenging, since there are indeed other wonderful presentations of each of these magnificent works!

The conductors and orchestras accompanying are especially important as well.  I find the perfect combination in some of these to be Rudolf Serkin and George Szell, an astonishing collaboration!

I've again ordered the selections by birth years of conductors, so this list progresses fom the Baroque period to Classical to Romantic to modern --- quite a large development, but all worth experiencing!

After much consideration, then, here are my current first-level recommendations for a rarefied set of transcendent artistic works of genius.  As with the symphonies, I've put an *asterisk before the ones I recommend even more than the others as stunning works of art and meaning.

And now I've made links to Youtube selections of each one with a star! (For a couple of them I had to substitute a similar one by the same artist; and if the link is only to the first movement of a piece, make sure you listen to the second and third too!)

If these are new to you, have at it, and I hope your life is newly enriched!  If you’re a veteran appreciator, let me know your assessments!

*No. 2 in E Major --- Gould/Golschmann/Columbia

*No. 3 in D Major --- Gould/Golschmann/Columbia

*No. 4 in A Major --- Gould/Golschmann/Columbia

*No. 5 in F Minor --- Gould/Golschmann/Columbia

*No. 7 in G Minor --- Gould/Golschmann/Columbia

No. 18 in Bb Major --- Argerich/Jochum/Bavarian Radio

No. 23 in A Major --- Rubinstein/Wallenstein/RCA

*No. 25 in C Major --- Argerich/Wallberg/Royal Concertgebouw

*No. 1 in C Major --- Argerich/Wallberg/Royal Concertgebouw

*No. 2 in Bb Major --- Gould/Bernstein/Columbia

*No. 5 in Eb Major --- Rubinstein/Leinsdorf/Boston

No. 1 in G Minor --- Serkin/Ormandy/Philadelphia

No. 2 in D Minor --- Serkin/Ormandy/Philadelphia

No. 1 in E Minor--- Argerich/Abbado/London Symphony

No. 2 in F Minor--- Rubinstein/Ormandy/Philadelphia

*In A Minor --- Serkin/Ormandy/Philadelphia (2 versions, both great)

*No. 2 in C Minor --- Rubinstein/Reiner/Chicago

No. 1 in Db Major --- Graffman/Szell/Cleveland

No. 1 in C Minor--- Argerich/Nakariakov/Svizzera Italiana

No. 2 in F Major--- Bernstein/Bernstein/New York 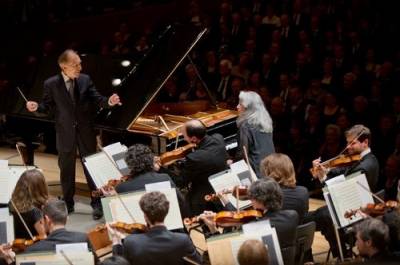