'Big Meadows Twilight' composed and played on the hammered dulcimer

Mar 12 Posted by Timothy Seaman in Hammered Dulcimer Topics and Ideas
In February of 2000 I purchased my present dulcimer, a Dusty Strings D600 (the eighth one out of the shop, the one Ray Mooers sent to Sam Rizzetta to confirm the design) --- and I decided to try developing a new technique using separated hands, stylized sort of like a pianist does it, together with the rich low range of this particular dulcimer model.

So I chose the key of A, and I chose to use all of the major and minor chords from the key so I could explore the use of each of their locations on the bass bridge.

And of course a melody needed to be composed, so in this case I explored chord progressions with my right hand while moving my left hand around on the left side of the treble bridge, and… this melody materialized!

You’ll notice that the ‘A’ section of the tune is in the key of A major, but the ‘B’ section is in the relative key of F# minor; that shift felt really good to me as I was developing it, so I kept it.

It was a pretty stressful process to teach my hands to separate in this way --- I was a relatively advanced player and needed to teach my old dogs new tricks --- but the thrill of the effect that came from some of the melody-chord motions kept me working on it!

The feeling I got while experiencing this new musical world was like that we have when we’re out in Big Meadows high on the Blue Ridge in Shenandoah National Park here in Virginia, in the early morning or late evening, when we’re camping up there.  So I thought the most appropriate title would be ‘Big Meadows Twilight’ and that has proven to be the perfect one!  Since 2000 I’ve actually gotten to play this piece many times at Big Meadows and Skyland in the Park --- such a privilege and joy!

Later in 2000 I was up there with my daughter Karen, and we decided to take musical photos in the twilight in the meadow.  As the sun was setting and coloring the sky I played the tune while Karen ran around with the camera, and the results are the photos you see here: authentic double-entendre Big Meadows Twilight!

Please also notice that the form of development is similar to what Classical musicians call ‘da capo form’ --- back and forth between sections and ending on the first --- but with more repeats than simple ‘da capo.’  So actually it’s more similar to ‘rondo form’ but without a third section inserted near the end.  On the attached pdfs of sheet music the directions only say to do ABA (da capo) but in the video I do my typical solo live version as ABABA.  In the studio recording on the albums Quiet in the Meadow and Common Wealth, I do more because other instruments join in for interest and variety: ABABABA.

By the way, notice that this choice of form leaves the melody and chord hanging, rather than resolving it.  Sometimes I prefer this type of ending; in fact, it may give the sense of wanting to stay up there at the meadow a lot longer!

I’m aware that there are only a few models of dulcimer on which one can play this piece in this exact way: the D600 series, Sam Rizzetta’s Extended-Range, and a couple of new models by other makers, so you may want to play it in D instead.  I’ve attached notated versions that are identical but in the two different keys.

Beyond the technique is expression:  If you decide to play this melody yourself, please make it your own!  Your own type of personal involvement and response may well be different than mine, but in any case, don’t just play the tune --- give it life!  My personal approach has a dramatic give-and-take similar to a Classical pianist’s interpretation, and for spontaneity’s sake I play the piece somewhat differently every time --- slower, faster, more evenly, more dramatically, more sweetly, etc.  And I use the suede side of the hammers.

I hope you get to visit Big Meadows soon!  See you there this spring, summer, or fall! 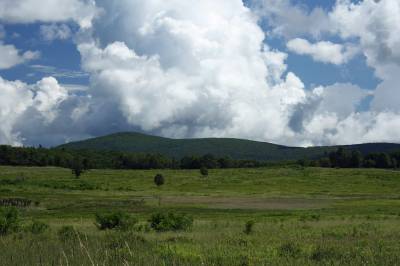